We do not claim we have ever reached – and indeed we hardly ever tried to reach – some overview of swedish art, to see where the hell there might have been fresh imaginative-investigative reveries-interventions pursued in this particular sphere, this problematic sphere which to us seems more or less completely doomed and derailing-diverting as a place, but which obviously remains an area where many scattered impatient minds will go to pursue occasionally perfectly surrealist instincts, in the absence (or mere isolatedness and relative weakness) of large-scale integrative ludic-experimental-utopian projects that would frame and boost all creative compulsions in a more adequate context...

Instead we have just tried to memorise those somehow interesting artists who have crossed our path or caught our eye during the past 25 years, and often we've failed to do even that. A certain polemical lack of interest in art, simply to counter the still dominant confinement/misunderstanding of surrealism itself as being a tendency in art, has indeed usually kept our attention elsewhere.

But with a tool such as a blog, we could at least present without further commitment an imperfect list of such artists whose work at least somewhere has some such freshly disturbing aspect – or rather only of those websites (usually but not always personal ones) that may perhaps betray this (thus it is clearly not an exhaustive list of swedish artists who remain under serious or absentminded consideration whether we like their stuff, since many have little or none web presence or keep the most interesting sides secret).

This will inevitably be quite haphazard, there be old and young, schooled and raw, unknown and famous, professionals and notorious amateurs, most are brief and/or indirect acquaintances but a few are very good friends (or are our own). We will eventually turn out to be thoroughly mistaken about some of them, while we are not at all ashamed that we have missed numbers of perhaps interesting ones. Some we admire but some are just cases where we would like to emphasise or seriously suggest a perhaps not obvious surrealist aspect. 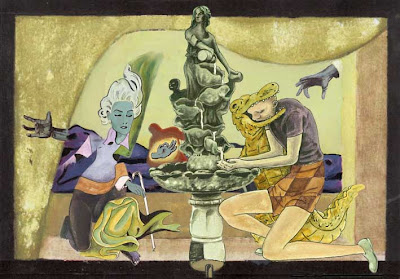 "In the parched path
I have seen the good lizard
(one drop of crocodile)
meditating."

Lorca, from The Old Lizard

"I was sitting writing on my textbook, but the work did not progress; my thoughts were elsewhere. I turned my chair to the fire and dozed. Again the atoms were gamboling before my eyes...My mental eye, rendered more acute by the repeated visions of the kind, could now distinguish larger structures of manifold conformation; long rows sometimes more closely fitted together all twining and twisting in snake-like motion. But look! What was that? One of the snakes had seized hold of its own tail, and the form whirled mockingly before my eyes. As if by a flash of lightning I awoke..."

(Friedrich August Kekule relating (possibly cryptomnesiacally) his discovery of the chemical structure of the benzene molecule in 1864)
"It had no need of eyes, for there was nothing outside it to be seen; nor of ears, for there was nothing outside to be heard. There was no surrounding air to be breathed, nor was it in need of any organ by which to supply itself with food or to get rid of it when digested. Nothing went out from or came into it anywhere, for there was nothing. Of design it was made thus, its own waste providing its own food, acting and being acted upon entirely with and by itself, because its designer considered that a being which was sufficient unto itself would be far more excellent than one which depended upon anything."
Plato, from Timaeus, (The Construction of the World)


"This symbol appears principally among the Gnostics and is depicted as a dragon, snake or serpent biting its own tail. In the broadest sense, it is symbolic of time and the continuity of life. It sometimes bears the caption Hen to pan - 'The One, the All', as in the Codex Marcianus, for instance, of the 2nd century A.D. It has also been explained as the union between the chthonian principle as represented by the serpent and the celestial principal as signified by the bird (a synthesis which can also be applied to the dragon). Ruland contends this proves that it is a variant of the symbol for Mercury - the duplex god. In some versions of the Ouroboros, the body is half light and half dark, alluding in this way to the successive counterbalancing of opposing principls as illustrated in the Chinese Yin-Yang symbol for instance. Evola asserts that it represents the dissolution of the body, or the universal serpent which (to quote the Gnostic saying) 'passes through all things'. Poison, the viper and the universal solvent are all symbols of the undifferentiated-of the 'unchanging law' which moves through all things, linking them by a common bond. Both the dragon and the bull are symbolic antagonists of the solar hero. The Ouroboros biting its own tail is symbolic of self-fecundation, or the primitive idea of a self-sufficient Nature - a Nature, that is which, à la Nietzsche, continually returns, within a cyclic pattern, to its own beginning. There is a Venetian manuscript on alchemy which depicts the Ouroboros with its body half-black (symbolizing earth and night) and half-white (denoting heaven and light)."

Text from Project Ouroborus at the University of Minnesota

To illustrate that our size is midway between that of the Planck scale - the smallest possible size - and that of the observable universe Joel R Primack and Nancy Abrams introduce the Cosmic Ouroboros, a serpent swallowing its own tail.

"The crocodile, which emerges silently and mysteriously from the waters of the lakes and river, could be likened to the primeval mound and was thus believed to embody the elemental powers of creation. Although a treacherous creature, it was considered a benefactor of the land, analogous to the Nile itself whose threatening floodwaters nonetheless ensured the perpetuity of life. Herodotus (writing in the fifth century BC) tells of our traditional belief in the elemental power of this beast and its ability to transform human beings into something approaching the divine:

'When anyone, be he Egyptian or stranger, is known to have been carted off by a crocodile or drowned by the river itself, such a one must by all means be embalmed and tended as fairly as may be and buried in a sacred coffin by the townsmen of the place where he is cast up; nor may his kinfolk or his friends touch him, but his body is deemed something more than human, and is handled and buried by the priests of the Nile themselves.'"

from introduction to Krokodilopolis (Per Sebek)


"How does the little crocodile
Improve his shining tail,
And pour the waters of the Nile
On every golden scale!
How cheerfully he seems to grin,
How neatly spreads his claws,
And welcomes little fishes in
With gently smiling jaws!"

"I have often," said Smee, "noticed your strange dread of crocodiles."
"Not of crocodiles," Hook corrected him, "but of that one crocodile." He lowered his voice. "It liked my arm so much, Smee, that it has followed me ever since, from sea to sea and from land to land, licking its lips for the rest of me."
"In a way," said Smee, "it's sort of a compliment."
"I want no such compliments," Hook barked petulantly. "I want Peter Pan, who first gave the brute its taste for me."
He sat down on a large mushroom, and now there was a quiver in his voice. "Smee," he said huskily, "that crocodile would have had me before this, but by a lucky chance it swallowed a clock which goes tick tick inside it, and so before it can reach me I hear the tick and bolt." He laughed, but in a hollow way.
"Some day," said Smee, "the clock will run down, and then he'll get you."
Hook wetted his dry lips. "Ay," he said, "that's the fear that haunts me."

"In the Orphic tradition, "Time" was personified as one of the main protagonists of creation. The folk-etymological identification of Cronus with "Chronos" then allowed for an attractive metaphorical explanation of Cronus’ cannibalism: the story symbolically signified the way time "eats" or takes away all things it has earlier produced. /.../
Probably drawing on earlier Phoenician creation stories, the Orphics also envisioned "Time" in the form of a cosmic serpent winding itself around the universe. When the first astronomers began to model the universe as a sphere rotating on an axis, this serpent was linked with the outer circumference of the cosmos or with the ecliptic band. The ancient Near Eastern image of the ouroboros or tail-biting serpent, which had existed long before in Egypt, was then used to represent this cosmic serpent wound around the earth."

from Myth as Metaphor by Rens Van der Sluijs

"And when we fell together

That I had to draw aside

to see the serpent eat its tail."

Posted by Kormorantrådet at 12:07 PM No comments: