Aquatic faunas do show up in far more places than expected. Of course, a bathroom sink is a rockpool and a rainpool is a lake. Then there are less obvious cavities. Think of a few. But there is also a certain lack of respect for distances in time. Eggs and seeds lay dormant for centuries, memory swims through subterranean channels, poems ignore whether they were written years ago or are not yet written at all.

A selection of poetry by Mattias Forshage in English is now available from Headlouse Press and Peculiar Mormyrid press via Lulu here. It is a main volume for purchase or for free download, and a dream story appendix only for purchase.

It is a tiresome geography lesson, and certain senses of survival will depend on it. Trust a nothing being. 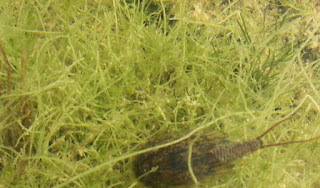 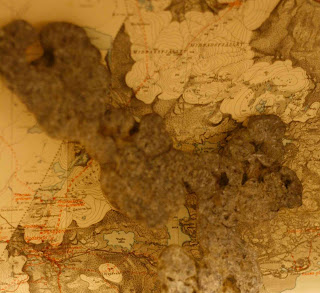 Posted by the biographed poet at 3:00 AM No comments:

I'd been compiling a rather massive compendium of animals in surrealism, a sketch of the surrealist bestiary if you will, for a long time (and it's now made available here). Many types of questions arrange themselves around that. Some of them gave rise to this analytical nightmare an early morning a month ago. Some people say they don't have analytical nightmares. Does that mean that they also will never get to see the rivers change directions?

BESTIARY AS SPIRITUAL REALITY
dream may 2016

For a long time I had been pursuing the stream by train
Looking out the window, composing dinners and trying to keep up distinctions
between different types of occurences of animals
in technical terms, some are simile, some are traditional emblems, only some are pure images
But isn’t everything a pure image during spring flood?
So this evening I was at the top of the big hill
An isolated dome, covered with coniferous forest, peaking at ca 500 m
It was not part of any quest
It was a fundraising party for something
The point had been to hijack the electrical system of the big abandoned sawmill
But no one wanted to DJ, the music was crappy
A klezmer band sitting on the stairs started to play in protest
I didn’t mind dancing, but I knew they would film it and post it online as ”the sucker who danced” and I will be turning my back most of the time but this epitome would prove fatal
At that point the dancefloor was intact
And I was sorting batteries to place them in the box according the the blueprint of the vast cellars
Yet another chore for which I was ill suited
Then after dark – and darkness comes early inside the coniferous forest
After dark the whole building would light up like a fire cracker (and the phrase would prove fatal)

At the very summit people were working hard where the stream turned into waterfall
Because the waterfall was an allegory of the bestiary of poetry
I thought it needed very little manipulation but some of my friends were very busy
Running around like timber loggers to keep the outlet from cluttering
Yes there are fallen trees in the stream
But if they made it all the way uphill why wouldn’t they make it over the lever
And most of the debris is not wood it is icefloes
In fact it is the dancefloor breaking up into icefloes
If we dance now it is everyone on their own floating island
And there are piles of peat towering like in a palsa bog
Where I wrestle in vain my friend Sebastian to make him stop subdividing the fragments
I’ve seen these rafters with their poles crowding the delta too often
They are the trickster ants making fun of my hypnagogic scenic views
Here come floating islands of marble shaped like map outlines of countries
And they too will make it through the narrow canal and out on the other side
Unless they took the subterranean route
Under Cromwell Road to the Natural History Museum in London
The rafters with their poles were active amidst the crowd in the tunnel there too
Could anyone say this is not futile?
Up here I see all these subcategories turn into pure images too
Even their ghosts have become fish
I will hug the waterfall 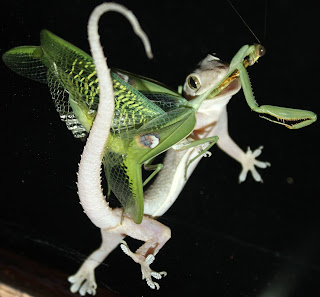 Posted by the biographed poet at 9:43 AM No comments:


To be found in one of the least obvious corners of such a landscape
A discrete fold in space just like the back of a sofa
Whatever is behind it is inevitable
The scaly skin of a scattered herring
Raised like the wing of a grand piano
A piano being peeled like an orange
There can be nothing at the back of a sofa
Emerging spots of bare rock
This is surely the best picnic spot
Maybe it was just the screech of an owl
These are not sharp pine needles
These are not fire ants
These are not threatful dogs lurking
These are not the usual quarrels surfacing
This is maybe an island from another world
And again it is difficult to tell where the horizon is
Are those clouds or is it a threatening wall of standing water, like a frozen tidal wave, or is it just the sea in the distance and we are all slightly tilted?
We can easily make up new archipelagoes
It’s not the worst part of the job
We can even sit down and relax feeding the exotic ducks
Our hands are not bloody and the fishing nets are clean
These are friendly carpenter ants
These are the soft needles of a larch
These are splendid martens watching from the edge of the forest
These are lions and tigers and bears
Vast church organs vast fishing nets vast muddy riverplains
But the compasses we managed to bring through don’t work out here
Maybe it’s just packed dirt preventing the needle from moving
There might be other hands of the clock waiting to emerge
But painfully as it rips our flesh on its way out
Like a spring from the sofa
Geometry tilts again
This is surely the best picnic spot
Especially now that it’s so dark

Sep 26th, M Forshage
Posted by the biographed poet at 4:39 AM No comments: 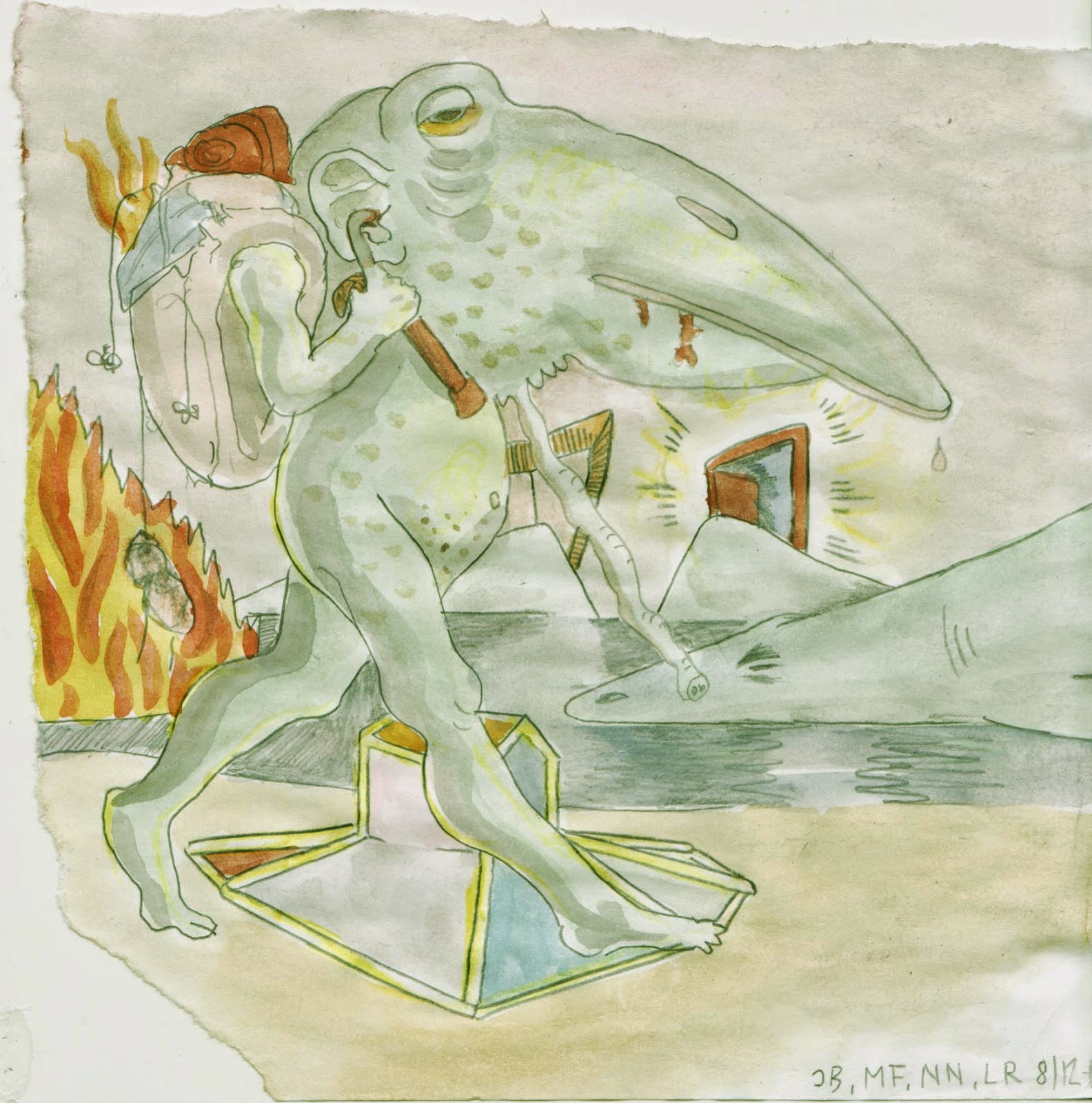 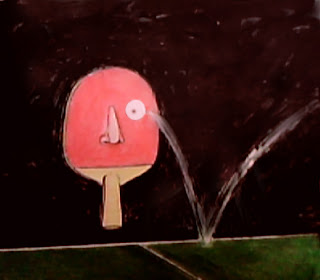 * from the nose: sound of snoring *

A dream object made by Paul Cowdell, seen by NN in a dream of his.
Posted by Kormorantrådet at 10:52 AM No comments:

Levitandum: an exhibition by Patrick Hourihan and Kathleen Fox

Levitandum is an exhibition of work by Patrick Hourihan and Kathleen Fox, both revealing through automatic means those concealed worlds of wonder submerged in the unconscious. 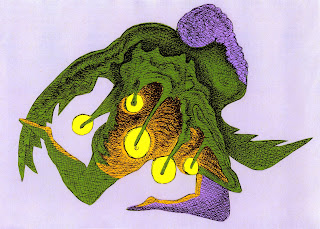 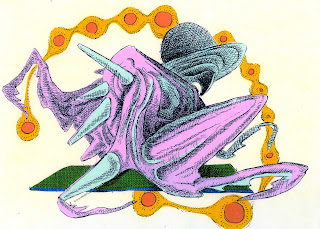 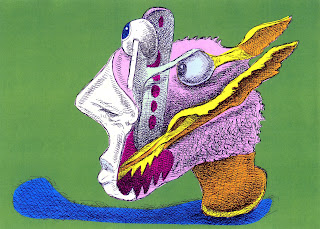 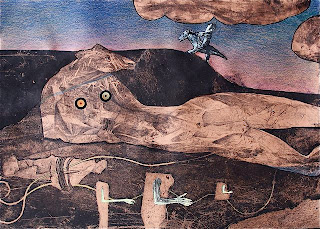 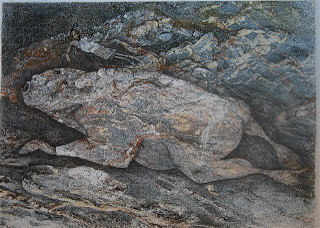 He Fly Almost by Kathleen Fox 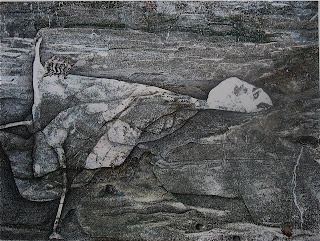 Patrick was born in London, UK, and is a member of SLAG.
Kathleen was born in South Africa and is a friend and associate of SLAG.
Both currently live in the UK.

Posted by the biographed poet at 11:18 AM No comments:

an exhibition of drawings, photographs and collages
by Merl Fluin and Paul Cowdell 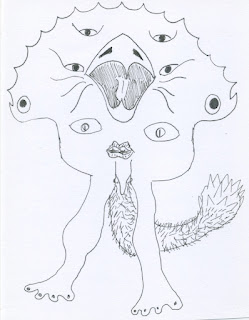 Merl Fluin and Paul Cowdell are members of SLAG (the Surrealist London Action Group) and sometimes also of the Stockholm Surrealist Group. They are also the joint directors of the Bureau of Surrealist Ethnology. They have participated in Surrealist explorations and events internationally, including in Athens, Chicago, Istanbul, London, Prague, Reading (Pennsylvania), Santiago de Compostela and Stockholm.

The title of this exhibition was suggested through objective chance in a letter to Merl and Paul from their friend John Andersson. The images presented are all the results of investigations into automatism, dreams, objective chance, interpretive delirium and mad love.
Posted by the biographed poet at 9:34 AM No comments:

Under a branch of acutely observant owls

Weary, trying to pass under a branch of acutely observant owls, I leaned back in horror to grab my ankles.

"Turn back!" the fattest of the birds cried, rising as to warn. But it was going nowhere, since the odd and cursed follower of my strayings had already seized it by the legs.

And as that composite beast, half light, half shadow, casually introduced himself to the dreamer´s hearing, saying: "Your posture now embodies the correctly conducted procedure of self-observation according to me, the abominable Piltdown Man", the horrified owl was screwed on to my neck while violently flapping its wings, thus propelling a bristly appearance to my soon externally materialized  ears.

At the same time a certain dimness and immobility set in to restrict my hitherto unbounded headless vision. And as bedazzlement shortly befell the synergy of our as yet unspecialized imagination, we were one.

No longer weary, the carriage could pass under the branch and roll into the woods, to the bleating glee of cheerful comrades.

Where are they now?

/ NN
Posted by Kormorantrådet at 12:55 PM No comments: 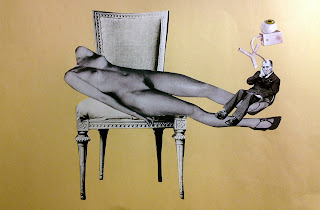