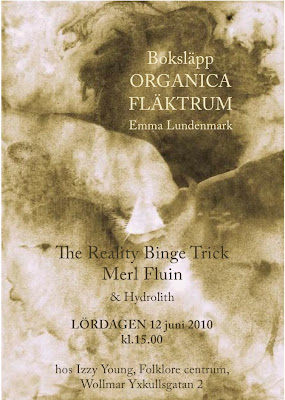 HYDROLITH COLLECTIVE
Hydrolith: Surrealist Research & Investigations
published by Oyster Moon Press
Posted by the biographed poet at 6:40 AM No comments:

The sparky man! Yes, he's so sparky. He's positively crackling. You know what I heard? There was this one time when he was supposed to be telling the children all about inorganic chemistry. I don't know why, it was something to do with the weather or the alignment of limbs or the dog star or whatever. Anyway, apparently he went all the way to the captain's quarters to steal the charts, right, because he didn't really know anything about inorganic chemistry but he knew that the captain had hidden a crib sheet inside one of the sea charts. But he stole the wrong charts and when he opened them up all this sticky stuff started pouring out! Imagine! It was all on his clothes and everything, LOL! That's not the point, though, anyway, the point is that he didn't have the right charts, and all the children were waiting, and all the mums and dads were there, and some of the mums were pushing pushchairs, you know, with big heaps of shiny tin cans piled up in the pushchair seats, with all the labels taken off. So you had to open the can to find out what was in it. So he started waffling and making things up, talking about tripods and bunsen burners and how the earth was at the centre of the sun, just whatever, and while he was talking he was sort of shuffling over to the pushchairs, and then he started rummaging around amongst the cans, still talking about magma and the universe and the galactic ice storm that had conjured all the stars into the Milky Way like ice crystals conjured into trees, and he kept on rummaging until he pulled out this one tin can that was all kind of blown out at the sides. I mean whatever was in there, meat or fish or whatever, I don't know, but that can was so old or had got so overheated from the sun or whatnot that whatever was in there must have been RANK and all the gas was trying to get out from inside the can and it was all blown up like a pregnant sea horse. And he slipped that can into his jacket pocket, still talking about iron ore and Sumatra and the boiling sulphur springs on the moon, and slipped off his jacket as if he was suddenly too hot, sweaty, needed to cool off, and then suddenly, WHAM, spinning his jacket round above his head, with that tin can still in the pocket, and spun it round and round and let go so that it flew off up into the sky, and then it fell back down and hit the blackboard at the front of the room, and the tin can exploded and the jacket caught fire and thousands and thousands of scorpions poured out and started running around everywhere. That's what I heard, anyway, from Nicola's mum, and her boyfriend's dad was there and saw it with his own eyes. And that's why the call him the sparky man, because he loves lightning so much that he has a big burn mark right down one side of his chest.
Posted by the biographed poet at 8:59 AM No comments: